I am always learning about new songs to add to this station. When I first started working on this project, I already had a personal collection of tracks I discovered in prior decades. That’s great but it’s not enough to establish a radio station. 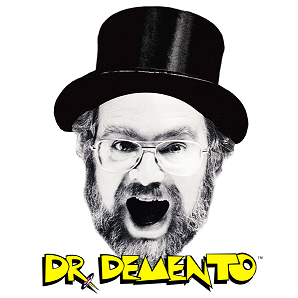 My first stop was Dr. Demento. Played by Barret Hansen, Dr. Demento is an American radio broadcaster and record collector specializing in novelty songs, comedy, and strange or unusual recordings dating from the early days of phonograph records to the present. Hansen created the persona in 1970.

I first learned about the Dr. from my Rocky Horror friends back in the 90s. I was late to the party like most of his current fans. Hansen released a number of compilation CDs over the decades. We feature a ton of these tracks in our station rotation.

I moved in the Twin Cities area in the early 2000s. It did not take long to discover KFAI. KFAI is an indy public station, and a great one at that. My all time favorite show on KFAI is Crap From The Past.

I have heard so many amazing selections on that show. The DJs banter is priceless. Archives of the show can be found on their ANSI-BBS style website.

Check out the site : crapfromthepast.com

My next stop was YouTube. I had seen a number of parodies on YouTube over the years by the likes of Bart Baker and The Key of Awesome. It doesn’t take much digging to discover that there are hundreds of YouTubers that upload goofy songs.

Of course I took a few books out of the public library. There is useful information there, but to be honest, there is actually an excellent entry on novelty songs to be found on Wikipedia.

The Funny Music Project is FAR OUT! The Fump is an archive of funny song releases; dating all the way back to 2007. The artists submit the songs themselves and there is an every growing host of oddballs on the roster. Artists and fans have built an entire community around this project. They even have conventions!

The FUMP releases two new songs every week. Monthly compilation CD become available as well. You can spend days exploring this site. It’s worth the subscription too if you are as nutzo as we are for this kind of stuff.

We will be adding stuff from this source for the foreseeable future.

Learning about all this great music is one thing, Trying to obtain copies of the music is another! Try Amazon, Ebay and Thrift Stores. It can be a lot of fun collecting LPs and CDs. Check out our Twitter feed if you want to see my collector photos.

I hope you have a good time exploring these links! When you are done, we’ll be here spinning up our favorites! See you then! – Wacky Alex